1) What is Ramadan actually about? 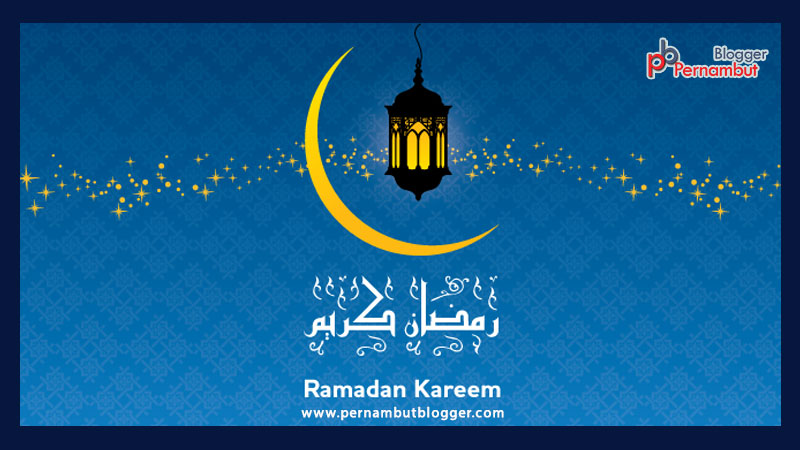 Ramadan is the most sacred month of the year for Muslims — the Prophet Mohammed reportedly said, “When the month of Ramadan starts, the gates of heaven are opened and the gates of hell are closed and the devils are chained.”
Muslims believe it was during this month that God revealed the first verses of the Quran, Islam’s sacred text, to Mohammed, on a night known as “The Night of Power” (or Laylat al-Qadr in Arabic).
During the entire month of Ramadan, Muslims fast every day from dawn to sunset. It is meant to be a time of spiritual discipline — of deep contemplation of one’s relationship with God, extra prayer, increased charity and generosity, and intense study of the Quran.
But if that makes it sound super serious and boring, it’s really not. It’s a time of celebration and joy, to be spent with loved ones. At the end of Ramadan there’s a big three-day celebration called Eid al-Fitr, or the Festival of the Breaking of the Fast. It’s kind of like the Muslim version of Christmas, in the sense that it’s a religious holiday where everyone comes together for big meals with family and friends, exchanges presents, and generally has a lovely time.
Despite the hardship of fasting for a whole month, most Muslims (myself included) actually look forward to Ramadan and are a little sad when it’s over. There’s just something really special about knowing that tens of millions of your fellow Muslims around the world are experiencing the same hunger pangs, dry mouth, and dizzy spells that you are, and that we’re all in it together. 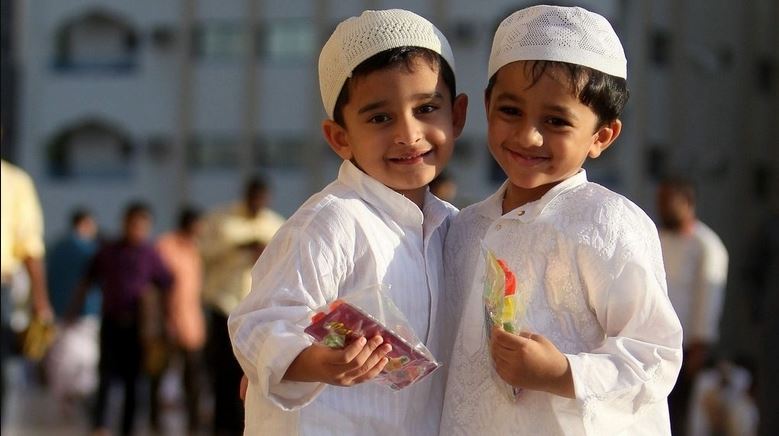 2) How does fasting work?
Fasting during Ramadan is one of the five pillars — or duties — of Islam, along with the testimony of faith, prayer, charitable giving, and making a pilgrimage to Mecca. All Muslims  are required to take part every year, though there are special dispensations for those who are ill, pregnant or nursing, menstruating, or traveling, and for young children and the elderly.

The practice of fasting serves several spiritual and social purposes: to remind you of your human frailty and your dependence on God for sustenance, to show you what it feels like to be hungry and thirsty so you feel compassion for (and a duty to help) the poor and needy, and to reduce the distractions in life so you can more clearly focus on your relationship with God.

During Ramadan, Muslims abstain from eating any food, drinking any liquids, smoking cigarettes, and engaging in any sexual activity, from dawn to sunset. That includes taking medication (even if you swallow a pill dry, without drinking any water). Chewing gum is also prohibited (though I didn’t find that one out until about halfway through my first Ramadan after converting — oops). 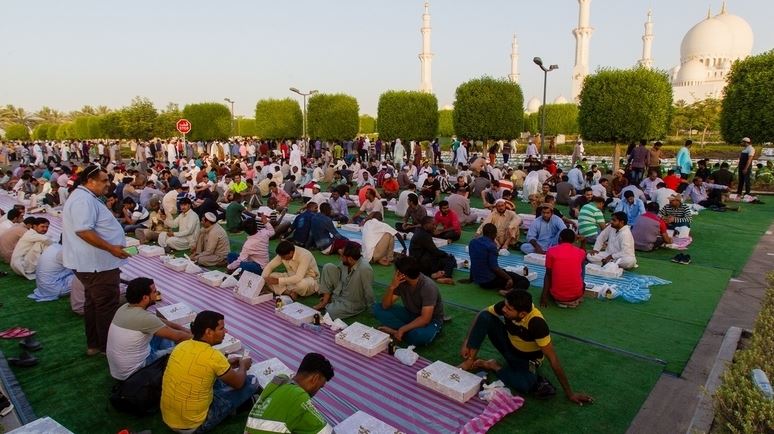 Doing any of those things “invalidates” your fast for the day, and you just start over the next day. To make up for days you didn’t fast, you can either fast later in the year (either all at once or a day here and there) or provide a meal to a needy person for each day you missed.

Muslims are also supposed to try to curb negative thoughts and emotions like jealousy and anger, and even lesser things like swearing, complaining, and gossiping, during the month. Some people may also choose to give up or limit activities like listening to music and watching television, often in favor of listening to recitations of the Quran.

3) What is a typical day like during Ramadan?
During Ramadan, Muslims wake up well before dawn to eat the first meal of the day, which has to last until sunset. This means eating lots of high-protein foods and drinking as much water as possible right up until dawn, after which you can’t eat or drink anything. At dawn, we perform the morning prayer. Since it’s usually still pretty early, many go back to sleep for a bit before waking up again to get ready for the day (I certainly do).

Muslims are not supposed to avoid work or school or any other normal duties during the day just because we are fasting. In many Muslim countries, however, businesses and schools may reduce their hours during the day or close entirely. For the most part, though, Muslims go about their daily business as we normally would, despite not being able to eat or drink anything the whole day.

When the evening call to prayer is finally made (or when the alarm on your phone’s Muslim prayer app goes off), we break the day’s fast with a light meal — really more of a snack — called an iftar (literally “breakfast”), before performing the evening prayer. Many also go to the mosque for the evening prayer, followed by a special prayer that is only recited during Ramadan.

This is usually followed by a larger meal a bit later in the evening, which is often shared with family and friends in one another’s homes throughout the month. Then it’s off to bed for a few hours of sleep before it’s time to wake up and start all over again.

(Note: There are good reasons for only having a small snack to break your fast before performing the evening prayer and then eating a bigger meal later. Muslim prayers involve a lot of movement — bending over, prostrating on the ground, standing up, etc. Doing all that physical activity on a full stomach after not having eaten for 15 hours is a recipe for disaster. Just trust me on this one.)

4) So do you lose weight during Ramadan?
Some of you may be thinking, “Wow, that sounds like a great way to lose weight! I’m going to try it!” But in fact, Ramadan is actually notorious for often causing weight gain. That’s because eating large meals super early in the morning and late at night with a long period of low activity bordering on lethargy in between can wreak havoc on your metabolism.

But if you’re careful, you can avoid putting on weight, and you may actually lose a few pounds. One meta-analysis of scientific studies on the effects of Ramadan fasting on body weight found that “[w]eight changes during Ramadan were relatively small and mostly reversed after Ramadan, gradually returning to pre-Ramadan status. Ramadan provides an opportunity to lose weight, but structured and consistent lifestyle modifications are necessary to achieve lasting weight loss.” [Italics mine.]

So just like with any other extreme diet plan, you may lose a few pounds, but unless you actually make “structured and consistent lifestyle modifications,” you’re probably not going to see major, lasting results.

5) Why do the dates of Ramadan change every year?
For religious matters, Muslims follow a lunar calendar — that is, one based on the phases of the moon — whose 12 months add up to approximately 354 days. That’s 11 days shorter than the 365 days of the standard Gregorian calendar. Therefore, the Islamic lunar calendar moves backward approximately 11 days each year in relation to the regular Gregorian calendar.

So that means that the first day of the month of Ramadan, which is the ninth month of the Islamic lunar calendar, moves backward by about 11 days each year. This has a large impact on how people experience Ramadan from year to year. When Ramadan falls in the winter, it’s much easier to fast: the days are shorter, which means you don’t have to fast as long, and it’s colder out, so not being able to drink water all day isn’t as big of a deal because you’re not sweating as much.

Conversely, when Ramadan falls in the summer, fasting can be brutal. In many Muslim countries in the Middle East and Africa, summer temperatures can reach levels usually reserved for the deepest bowels of hell. And in some Northern European countries such as Iceland, Norway, and Sweden (where, yes, there are Muslims), fasting can last an average of 20 hours or more in the summer.
(And in a few places above the Arctic Circle, the sun never actually sets in the summer. In these cases, Muslim religious authorities have decreed that Muslims can either fast along
with the closest Muslim country or fast along with Mecca, Saudi Arabia.)

6) Okay, but why is there always confusion every year about exactly what day Ramadan starts on?
There’s a reason “Ramadan start date” is one of the most-searched phrases every single year. That’s because Muslims around the world do not know when exactly Ramadan is actually supposed to start. If you Google it, you’ll see there’s a little disclaimer under Google’s answer that says “Dates may vary”: That also has to do with the moon — as well as disagreements about science, history, and tradition, plus a bit of geopolitical rivalry.

The beginning of each new month in the Islamic calendar starts on the new moon. Which means the month of Ramadan starts on the new moon. Simple enough, right? Wrong. If it’s been a while since your high school astronomy class, here’s a reminder of what the phases of the moon look like: Back in Mohammed’s day, in sixth-century Arabia, astronomical calculations weren’t as precise as they are today, so people went by what they could see with the naked eye.

Since the new moon isn’t actually super visible in the night sky (as you can see above), Muslims traditionally waited to start fasting until the small sliver of crescent moon became visible. There’s even a saying attributed to the Prophet Mohammed about waiting to start the fast until you see the crescent. (Some people think this is why the star and crescent is the symbol of Islam, but the crescent was used as a symbol long before Islam.)

This method was a bit messy, though, since things like clouds or just the difficulty of spotting the moon in some locations often led to different groups starting their fast on separate days, even within the same country. Each community, village, or even mosque within the village might send its own guy out to look for the crescent, with rival groups arguing over whether the other guy really saw it.

Today, however, we have precise scientific calculations that tell us exactly when the new moon begins, and we don’t need to wait until someone spots a tiny crescent in the sky. (In fact, according to the Oxford Dictionary of Islam, “The need to determine the precise appearance of the hilal [crescent moon] was one of the inducements for Muslim scholars to study astronomy.”) So, problem solved! Except that some Muslim scholars believe we should still wait until the slight crescent moon is visible in the night sky because that’s what Mohammed said to do and that’s the way we’ve always done it.

Others argue that Islam has a strong tradition of reason, knowledge, and science, and that if Mohammed were around today, he’d choose the more precise scientific calculations over sending the guy at the mosque with the best eyesight outside to squint at the night sky. To make things even more fun, some argue that the whole world should just follow the official moon-sighting decrees of Saudi Arabia, the birthplace of Islam and the location of its holiest sites. But not everyone thinks that’s such a swell idea — especially rival countries like Pakistan and Iran, which balk at the idea of treating Saudi Arabia as the ultimate authority on anything having to do with Islam.